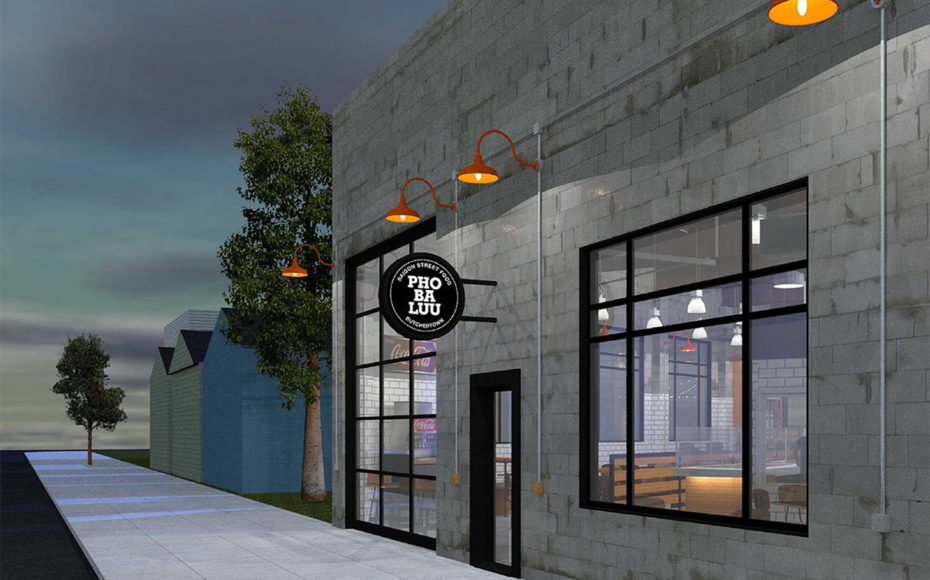 When you walk into the completed Pho Ba Luu restaurant later this year, you’ll notice a fresh combination of old and new architecture. The Vietnamese restaurant, the vision of Stewart Davis and his fiancée Jessica, will occupy a prominent East Main Street site inside a former mechanic’s shop that’s under renovation as part of developer Andy Blieden’s larger Butcher Block project.

While Blieden is keeping the 75-year-old patina of the structure’s concrete blocks exposed, he and Davis aren’t going for a rustic feel to dominate the space. Much of the old garage aesthetic, including an old heater suspended from the ceiling, will shine through in the new design, but there are plenty of modern materials that bring the space up to date. “We’re not trying to do a bunch of reclaimed materials,” Davis said. “The bar’s going to be kind of a reclaimed area, but we didn’t try to go out and find a vintage garage door. We’re not going to go put a potbelly stove in.”

Rather, Davis said the food itself drives the design of the restaurant. “From a design standpoint, we started off with the menu,” Davis said. “And so every single piece is there for a specific reason. It has to do with being efficient with the service.”

Still, Davis knows that good design can enhance the customer experience, including how much visitors enjoy their meals. “We wanted to bring a cool atmosphere, to target a broad range of crowds,” he said, noting that it’s hard to find great design in such a restaurant unless you’re on the coasts. “One of the things we wanted to do with the design was really show that Vietnamese food if fresh—it’s healthy,” Davis said. 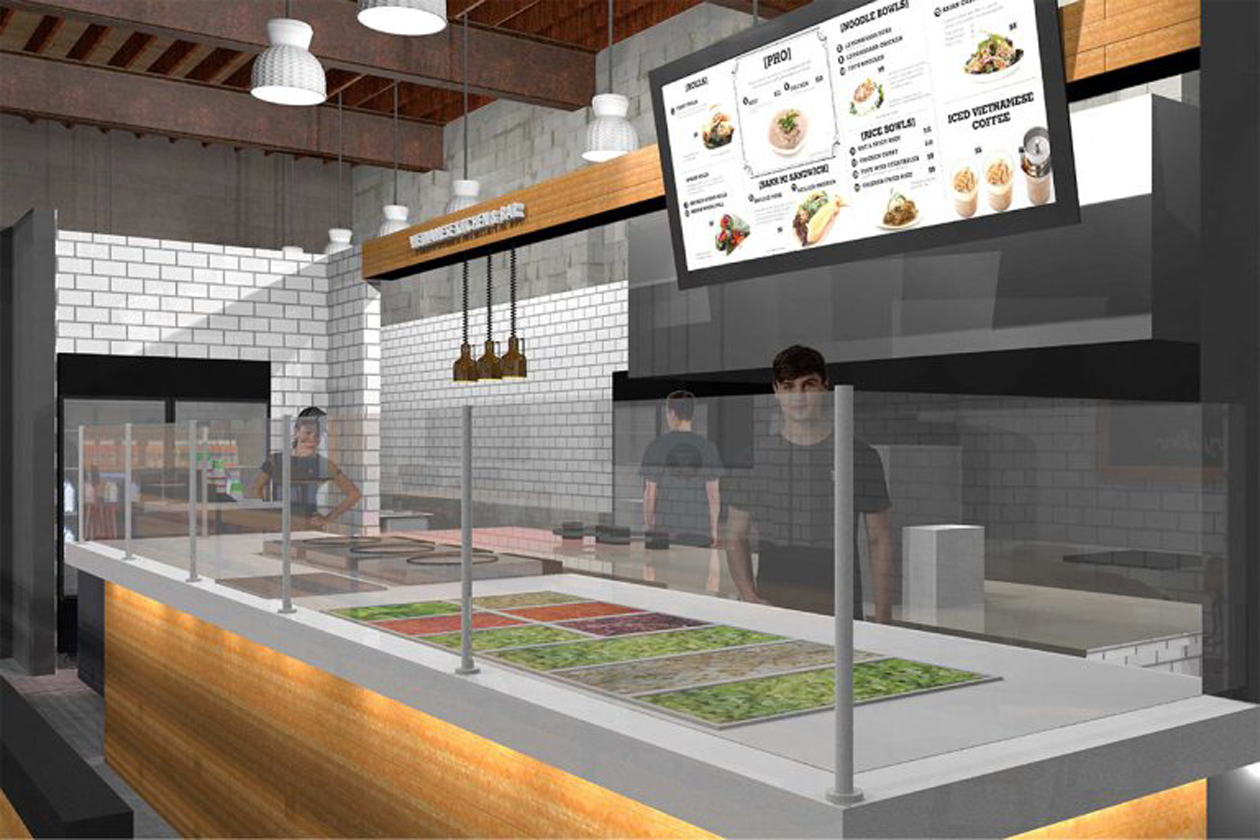 Walking into the space from Main Street, you’re greeted by the service line flanked by seating areas with space for 74 diners. Patrons will place his or her order after walking past fresh vegetables and cooking Pho, the traditional Vietnamese soup. “You don’t order by building your meal,” Davis said, “because it’s a specific menu that took hundreds of years to make.” Rather a menu of food options outlines what’s available. Once an order is placed, customers grab a number and the food is brought out to their table.

The seating arrangement is designed to be flexible. Banquet seating is placed on one side while another seating area includes a lower ceiling to make it feel distinct from the larger room. “On the audio side, we zoned that a specific zone, so if someone is there having a meeting, we can turn down the volume just there,” Davis said.

Two large garage doors—one in the front facing Main Street and another in the back facing a courtyard—can be opened in warm weather to connect the space with the outdoors. Seating, whether tables or high-top seats, can blend with the activity of Main Street when the doors are open. A bar is at the back of the space next to the other garage door.

Davis is working with Chris Burgin to design the restaurant in house at Louisville-based Axxis, Inc.

When asked how he came up with the restaurant concept, Davis quipped, “I didn’t, the Vietnamese did.” But Davis has a very personal connection with the food being served. “My fiancée [Jessica] is Vietnamese,” he said. “So we’ve been looking at it for a few years. She’s from Dallas, and in Dallas, on every corner there’s a pho restaurant.”

In Vietnamese, Ba means Mrs. and Luu is Jessica’s family, so the restaurant Pho Ba Luu translates to Mrs. Luu’s Pho. “These are her mother’s recipes,” Davis said. “It’s all very traditional.”

“If you think about it, all these things were prepared on the streets of Vietnam,” Davis said. “It’s like street food. And it’s fast. It’s really made for a fast-casual concept.”

Davis said once the restaurant gets going, more dining options will be introduced. “During lunch it’ll be very fast,” he said. “During dinner, we’re going to morph into a late night, happy hour, and that kind of thing. Then there will more cocktails, runners, and more service.”

“Stewart had great design ideas,” Blieden said. “I was very excited because it was the right fit for the right building at the right time.”

“I’ve worked with so many restaurants, and it’s important that you’re swimming in the same direction. It’s just critical,” Blieden said. “When he got the building, he didn’t come in here and say we need to change this and that. He said, the shell is great and we can utilize it.”

“I looked for about a year and a half for a spot,” Davis said. “Restaurants are hard enough, but dealing with real estate on the front end was almost impossible.” After a friend recommended Blieden, a match was made. “There’s no way we’d be doing this, period, if it wasn’t for Andy’s involvement in it,” Davis said.

“This building was a catalyst for buying all the buildings,” Blieden said. “I always drove by this building, and I always said, if this building ever comes up for sale… It’s one of the building’s I have always wanted. And I thought it would be perfect for a restaurant.”

“Compared to the Blind Pig, this is a blank slate,” Blieden said.

Blieden is continuing the vision of Bruce McCann who assembled the properties and planned to renovate them himself in 2015. Read more about the full Butcher Block project here.

And as the renovation work is showing, Blieden and team are knocking this one out of the ballpark. “Good design is hard to do,” Blieden said. “Bad design is a large target, good design is a small target. But what I’ve learned is that good design doesn’t cost any more than bad design.”

Link to Original Article from BrokenSidewalk.com >>